No Coal Mines Near Our Wilderness

Join the NSW Movement for Life teams to get informed on the threat to our wilderness from dirty coal proposals.

What: We're hosting an Information Session with the new NSW Campaigner Victoria Jack about three proposed Coal Mine Licences in Rumker, Hawkins & Ganguddy-Kelgoola - all far too close to the precious Blue Mountains & Wollemi Region.

Where: Zoom! Link will be provided when you RSVP. 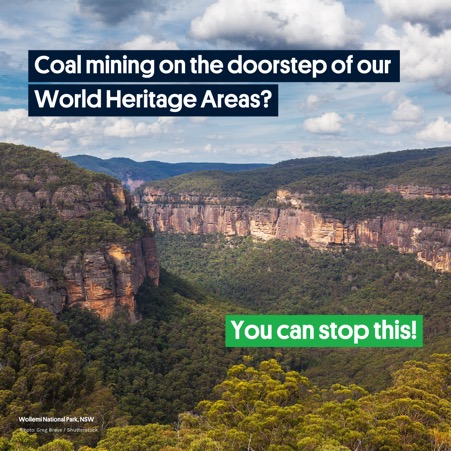 Why: We are asking the NSW Wilderness Society Volunteer Teams to come together and find out about our first campaign mobilisation to saying no to coal in this region. Learn how your team can get active & make a difference!

Background: In mid 2020 the NSW Government announced areas they may release for future coal mining as part of a wider coal strategy, including near the Wollemi region.

Eight areas for the potential release of coal exploration were identified. These areas include sites bordering national parks, such as Wollemi - the largest wilderness area in NSW.

Come along to get informed. This will be an information session for our NSW Teams with the Campaign Manager & Community Organisers

The best chance to stop risky projects is before they even start. Together, we can stop these dirty coal proposals from progressing to the next step.